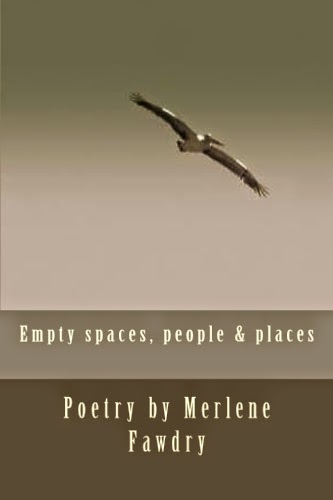 This collection of poetry incorporates poems from In Empty Spaces, Fixwrite 2007, with other works loosely arranged in a sequence of people and place to illustrate various aspects of spiritual or emotional voids. Throughout these snapshots of the human condition, the threads of resilience and hope have been woven to create a contemporary tapestry of verse.


Merlene Fawdry has incorporated some of the poems from her publication In Empty Spaces (Fixwrite,
2008), in a revised and much expanded work: Empty spaces, people & places (Fixwrite, 2014)....we lived a carefree life/until the shutters opened/on death and dying...

In the new release, the poet again begins with the title poem Empty Spaces, a work in 5 parts, the opening stanza expressing the optimism of post war Australia in the 1950s, when life for the young was carefree and untrammelled in the nirvana that seemingly was theirs. Shielded from the oppression of war their parents' generation understood only too well, there was no blight on the landscape, nothing to mar the expectation of outward happiness. However, the nirvanic bubble would burst, when death visited, as it does in unforeseen ways, bringing doubt to the childhood expectation that immortality was a given for the young. The poem closes as it began, Born into optimism...

The collection contains almost 100 poems, diverse in range, from Life is a drag - to Between altar and apse; Wari wanjinju; Home of (no) mercy - and Happy birthday. These examples reflect an acute sense of observation; a concise way with words; an affinity with blood ties to the earth and the dream-time; a sense of outrage for the slave women silently bound to the rumble of the mangle; and the paradox of reality.

Every poem in this book is an expression of the poet's experiences and observations, allowing the spare use of words to tarry with the imagination and the emotions to gain a greater impact in the reader's mind. That impact takes effect as the reader travels the pages, caught in the mesmeric intrigue the words bring.