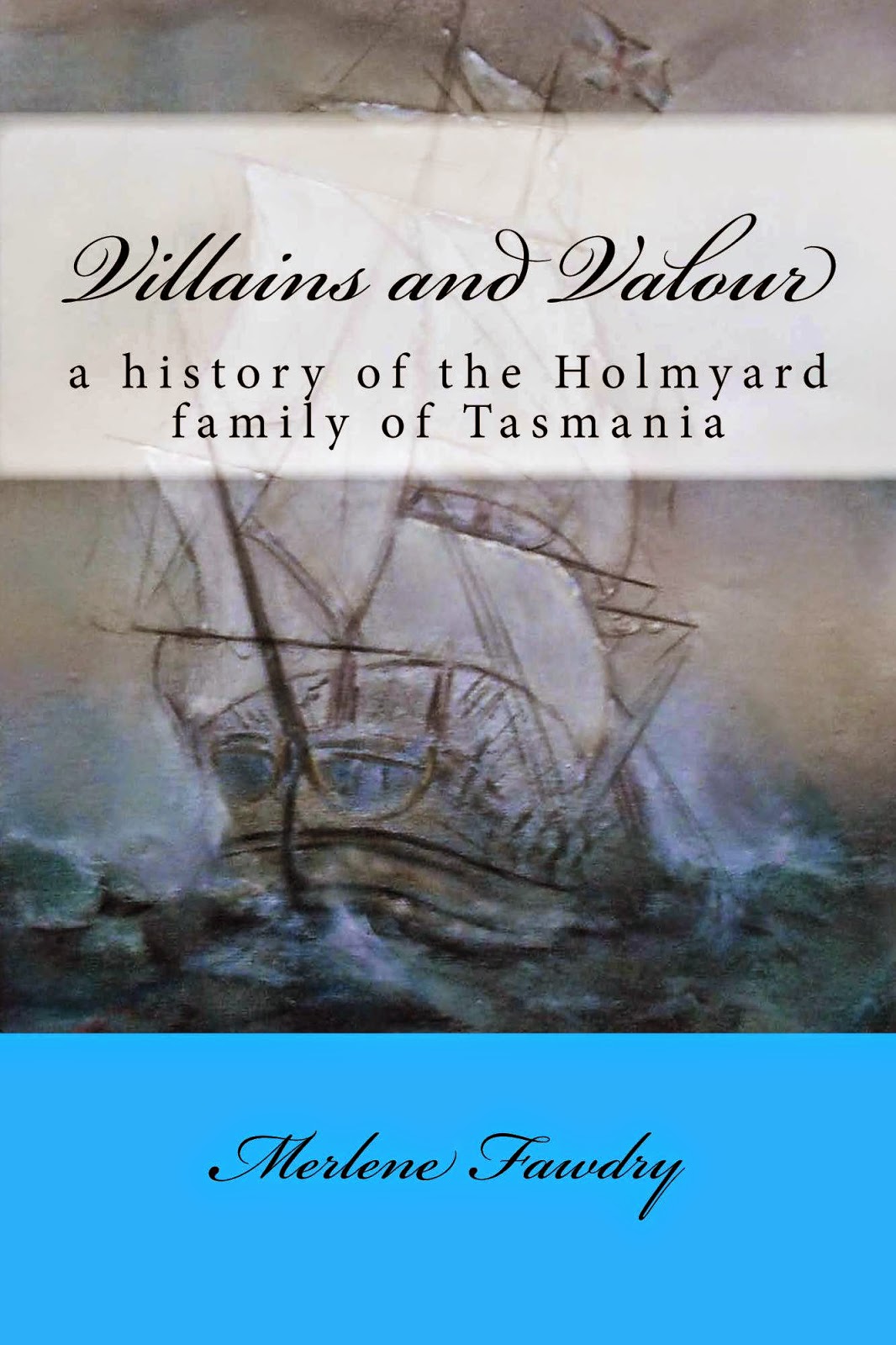 New Release on Amazon and Kindle

Villains and Valour: a history of the Holmyard family of Tasmania

In the absence of a biological family of my own, I tend to borrow heavily from those close to me, constantly amazed by the configuration of past and present generations. This story proved to be no exception. It has become a labour of almost obsession, as I scoured every record I could find in rare history books and online resources, each new link adding to my fascination. Each character came alive for me, telling their own account of the story as I walked in the shadow of their footsteps, travelling with them through the stinking city streets of Victorian England and on the long voyage to Van Diemen’s Land (VDL) and beyond as they moved and settled to the Westward of the island to the shelter of the Great Western Tiers.
I am indebted to the research on the Holmyards prepared by E J M Holmyard in 1972 and the amendments and additions made to this by D R Holmyard in 1998. Without this information, the task of finding a place to begin this story would have been much more difficult. I also acknowledge the complication in obtaining documents and personal information before the advent of online genealogy sites and newspapers, so when I use this earlier information as a base for clarification or correction, it is with the greatest respect and only offered to dispel myths that have evolved over several generations.
I began writing this book to record the history of the Holmyard family from the Deloraine and Elizabeth Town areas of Tasmania. It has become something more than that, growing to encompass the stories of four convicts and family lines that touch on the edge of many others. These stories are about family myths and legends, of relatives with no genetic links and others who have dropped off the tree altogether, all bound through shared experience and association. I have been amazed at the strength and resilience of these people in forging a life in their exile that formed the foundation for generations to follow. While some fell by the wayside of drink and criminal associations, others went on to become respected members of their communities in their own lifetime, raising large families who in turn continue to contribute to the fabric of the island.
Of particular interest to me has been the children of convicts and how their lives were affected by the transportation of their parent/s, aside from the obvious journey through nurseries and industrial schools, and how they and children born after expiry of sentence would never know the physical presence of grandparents and other kinfolk left behind in their country of origin. In this situation, unless the family chose a life of complete isolation, their social choices were limited to what and whom they knew and their supports came from within the ex-convict community. This added to the difficulty for those seeking to move beyond the convict stain, particularly those who remained in Deloraine after the closure of the shortly lived Probation Station in that town.
At times I found it difficult not to pass judgement on the practices of the colonial ruling class, just as I found it challenging to comprehend how those exiled in the name of crime could sacrifice their own sons and grandsons to the wars of an empire that had treated them with such harshness. Rascals and scallywags abound in these pages, all admirable for their spirit and determination and, just as we admire the courage of those who fought for this fledgling country, we must also be thankful for the villains as much as the heroes.
With the advent of the internet and with more records available on genealogy sites, family records have become more accessible, albeit costly. The downside of this has been the ease with which it is easy to get carried away and follow up branches far removed from original intention, impelled by curiosity to find out just another piece of information, however irrelevant it may be. With such tools available and the ability to cross check records at the click of a mouse, all events, names and dates in this book have been cross referenced using census, parish, criminal and immigration records. Much of the material in this book is offered verbatim from newspaper reports and records, with other information obtained through matching oral family history and official records, however, oral history that could not be substantiated, although included in these pages, should continue to be treated as calculated speculation until further information comes to hand.
Using online resources to explore family history can also lead to a continuation of errors if the original document contains a fault. This may be inadvertent, as where a census enumerator or registrar of Births, Deaths and Marriages mishears a name, or when the head of a household doesn't actually know the ages and birthplaces of everyone in the house. Other faults can be more deliberate, as when someone falsifies their age on a marriage or other record, which adds to the challenge of getting an accurate transcription for any sizable collection of records such as in this book. Even well-preserved handwriting of previous centuries is often difficult to read and sometimes requires serious study. Transcriptions done from digital scans of monochrome microfilm also means the transcriber is working from a lower quality source.
Typed and printed records, which we assume to be 100% accurate also have their own problems. Many of such documents are transcribed automatically by optical character recognition (OCR), where specialist software attempts to identify each character of the text from a scanned image. This is not foolproof; spaces between words are occasionally dropped, similar looking letters confused, and adjacent letters run together, resulting in abstract transposition.     In contrast to the factual corroborative evidence provided by newspaper items and public records, I have chosen to tell this story with a partial narrative by Mary Ann Nowell, thus giving this book the classification of speculative non-fiction.